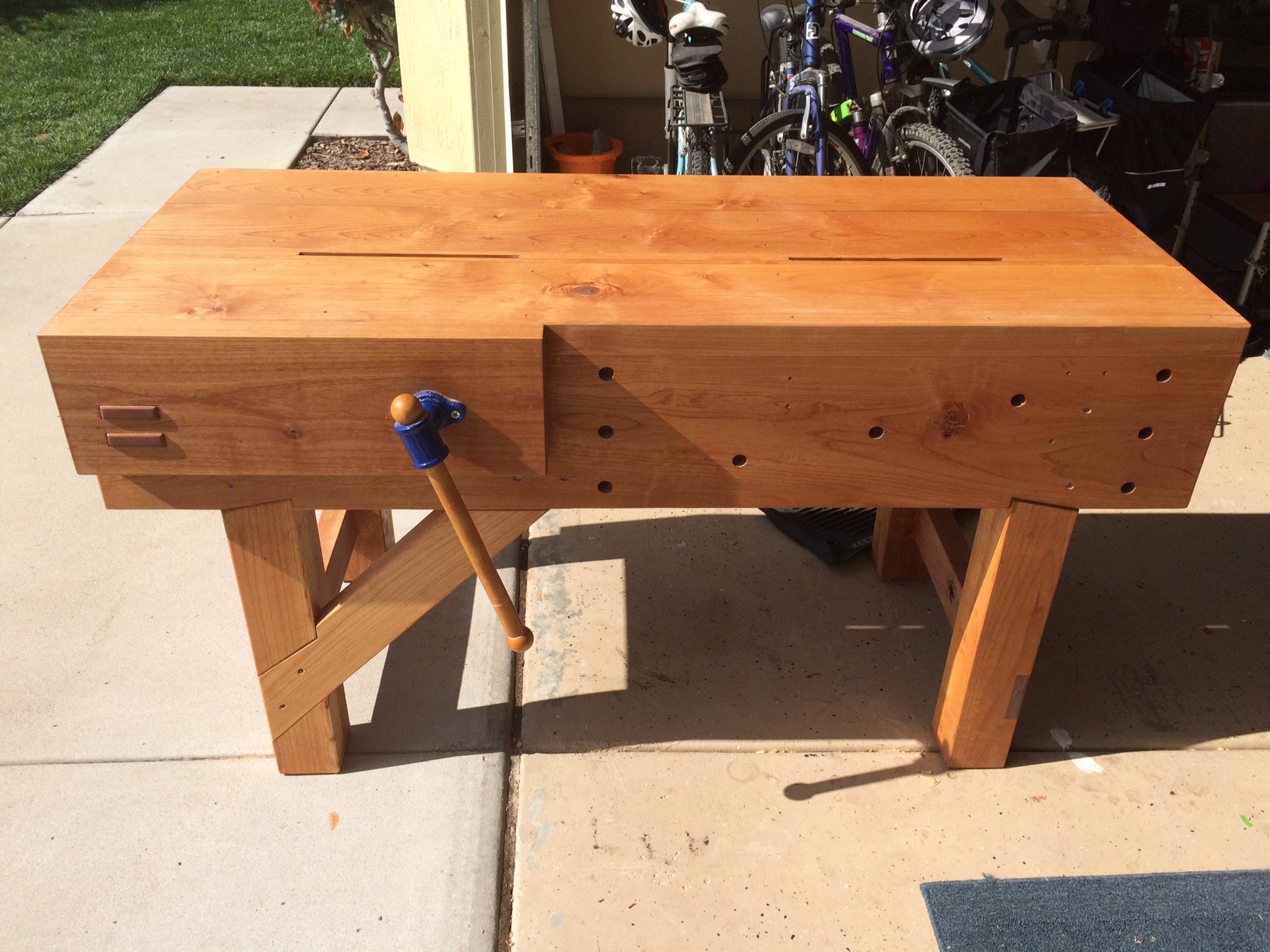 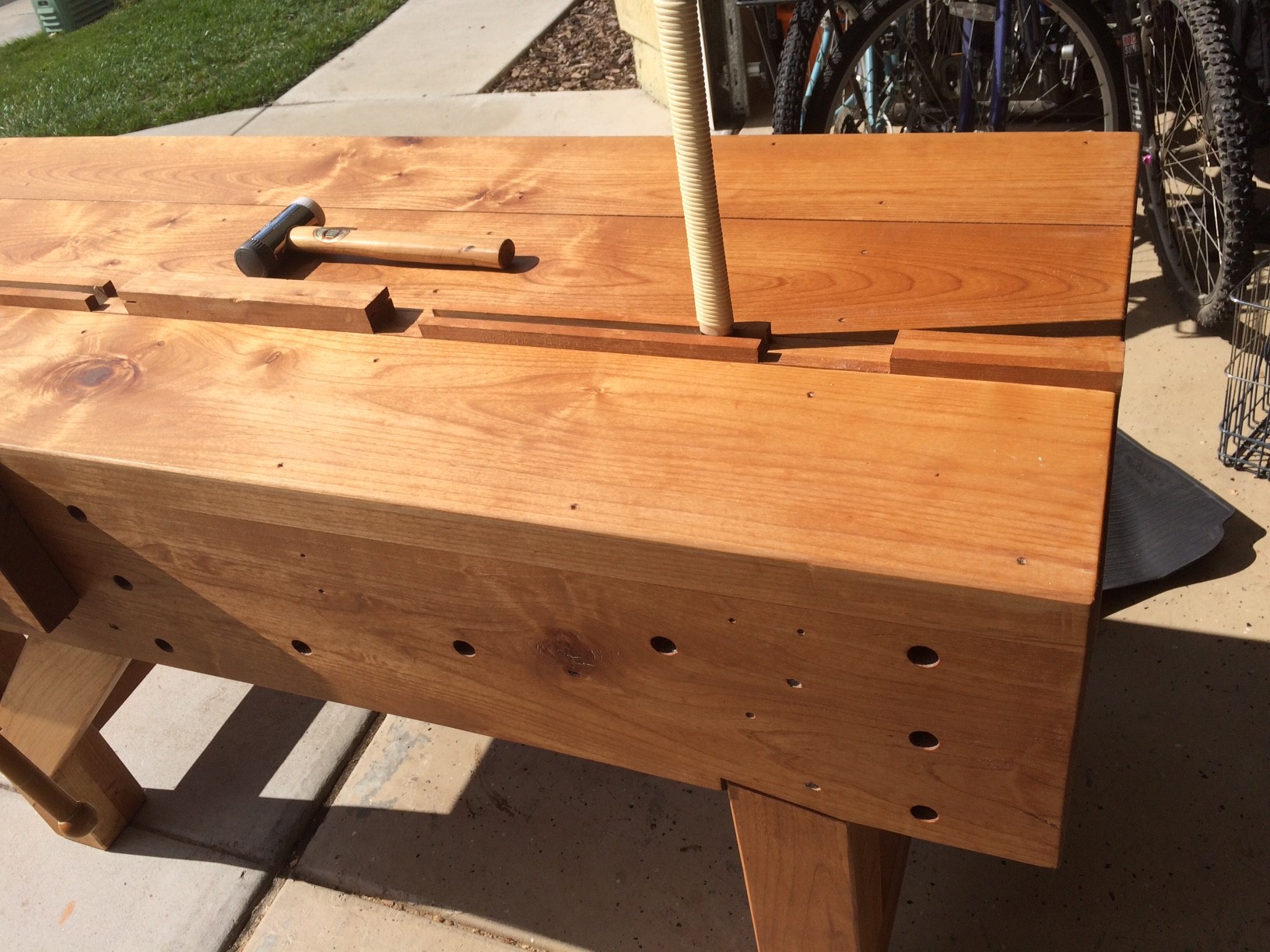 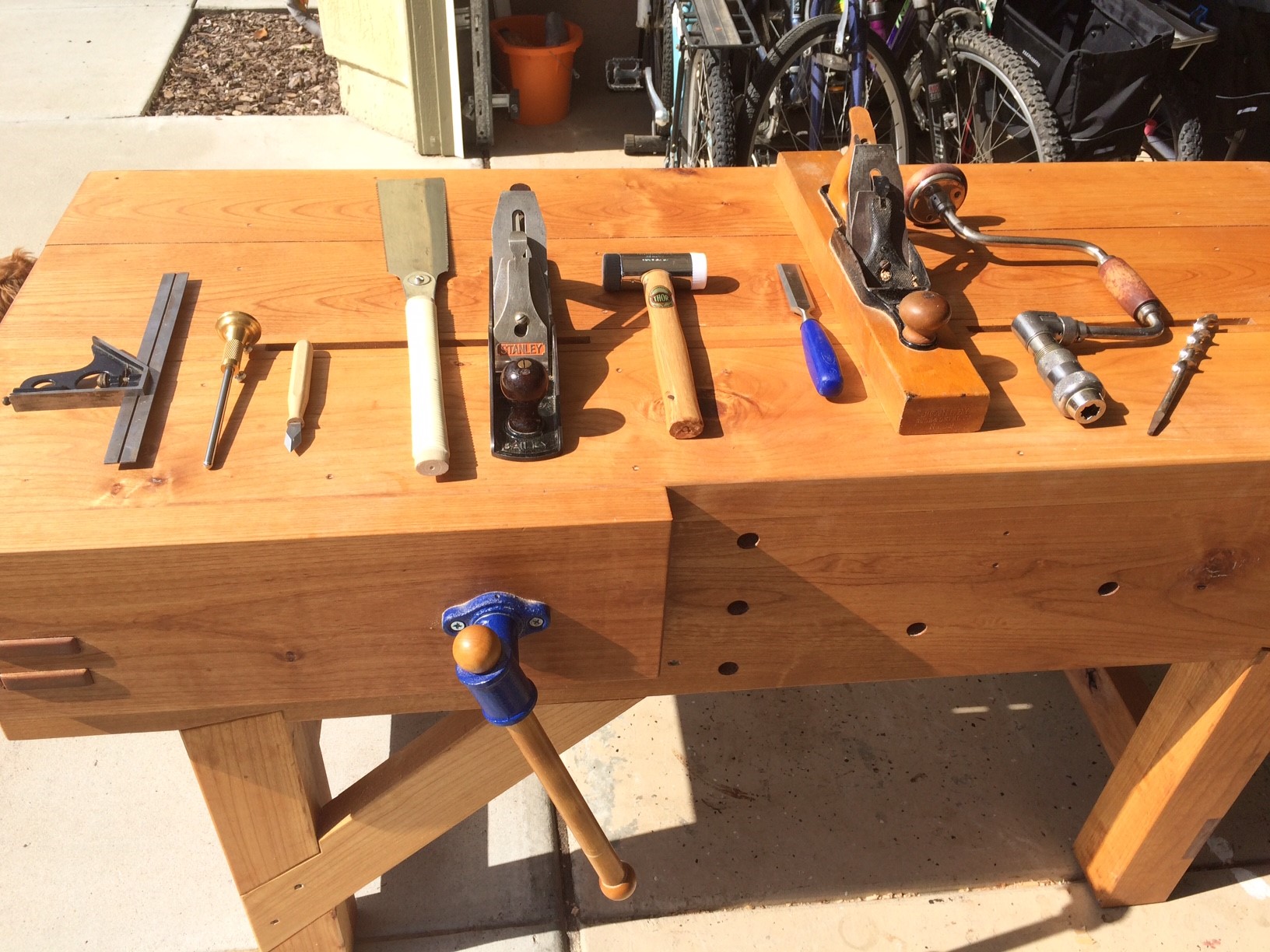 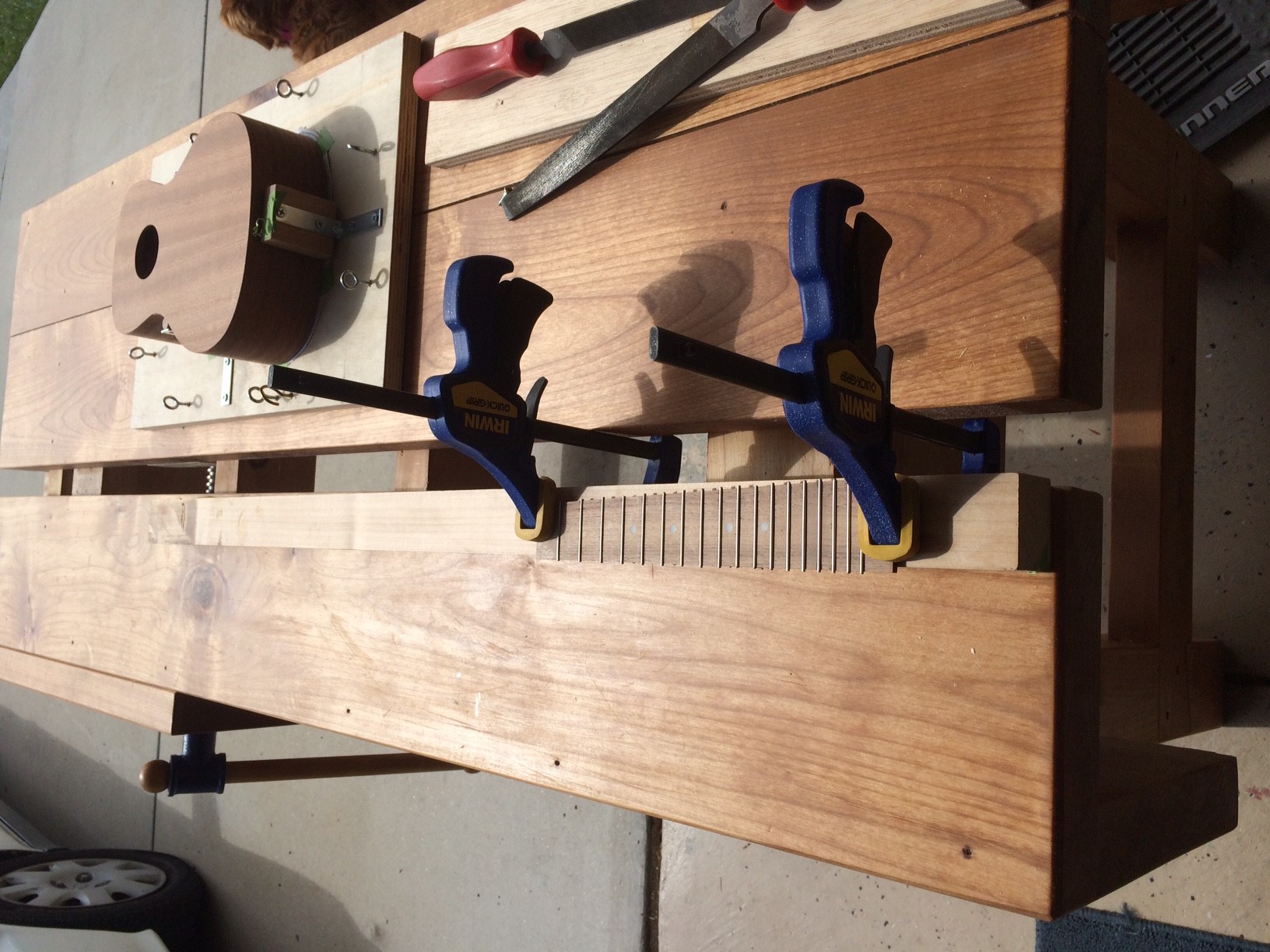 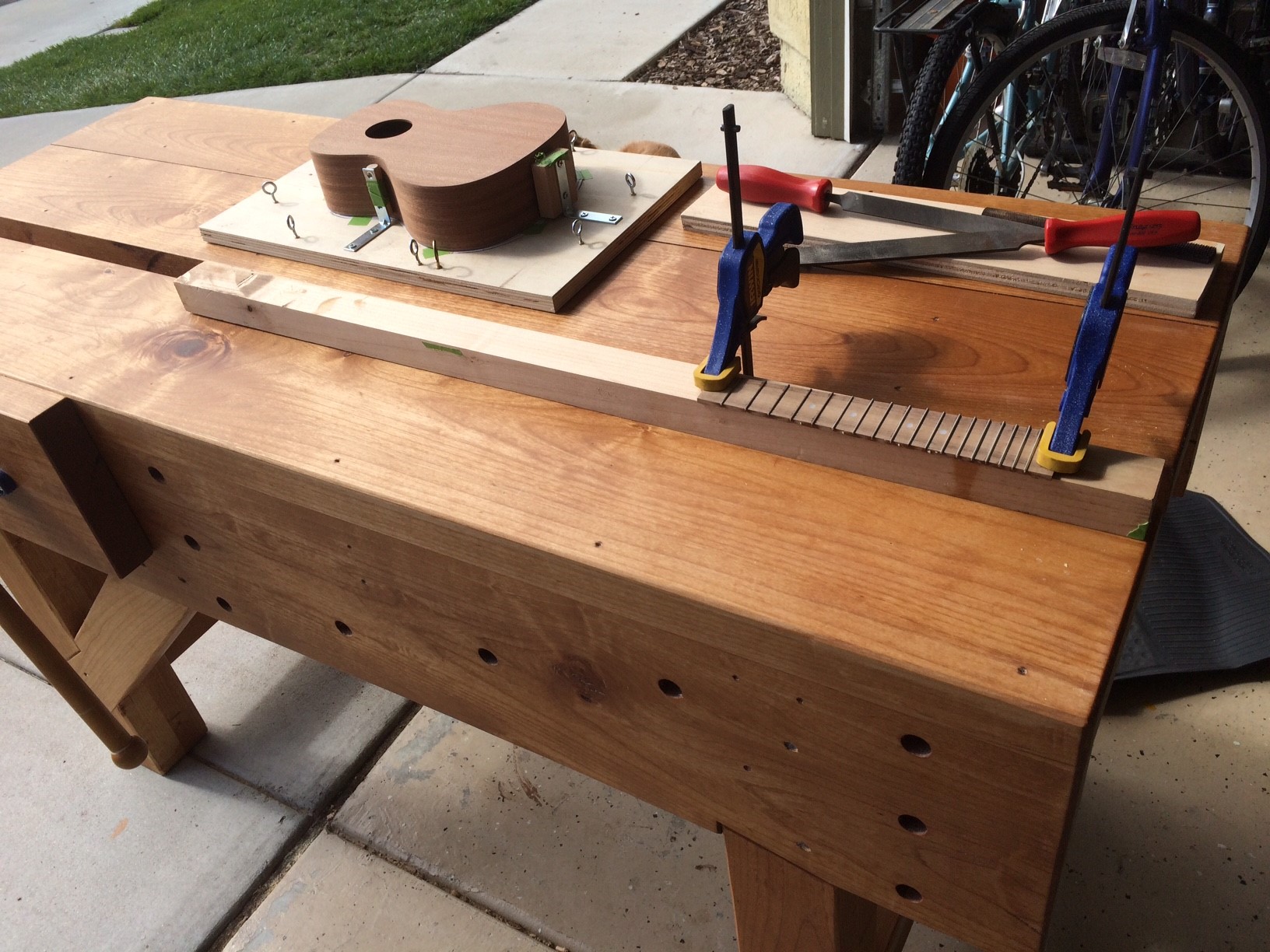 Finally finished my workbench I've been working on for about 4 months or so now. Hard to find time with a family and other stuff going on, home repairs etc. But I wanted to start working with hand tools, and what frustrated me the most about hand tools in the past was not having a way to hold them steady. I knew I needed a workbench to do some serious woodworking, so I started looking for a bench build. Most designs had a glued up top, which I didn't want to tackle since you kind of need a bench for the glue up, and a lot of clamps, which I don't have. So I narrowed it down to a couple benches, ultimately deciding on the English Workbench because : 1. it ticked all the boxes I needed, 2. it didn't need a glued up top, 3. the sample video quality and Richard's style blew away the competition, 4. Looks like they taught the basic skills needed, 5. I like the traditional look. So glad I chose this. I had barely any hand tool experience as far as joinery ( I had previously built things with table saw and pocket holes etc) I was able to build it with a pretty minimal set of tools as you can see. And I learned a TON of really good skills and joinery. A lot of little tips and tricks I never would have thought of. I did make some mistakes, but alder is cheap enough where a mistake wasn't very costly. But the best way to learn is by making those mistakes to see what works and what doesn't. I mainly followed the plans except I added the removable split top spacer to hold tools, allow for a saw/plane stop, and allow for clamping, as you can see in some of the pics. I used red alder, as that is about the cheapest wood available where I live, and much more stable than the construction grade wood at the big box stores. I slapped on several coats of BLO and turps, until it stopped absorbing anymore basically, probably 5 or 6 coats. Nice grippy surface. Used a $39 USD vise screw from Amazon, works good. Will add the Veritas pop up saw stop later. Since I shortened mine to 5' , I was having some space issues on the left with the vise parts already, didn't want to add another block of wood to that section. So far its working great, using it for working on a Ukelele kit with my daughter, and really enjoying all the clamping options. After that I'll probably crack on with the hall or side table build to build up my hand tool skills. Thanks!